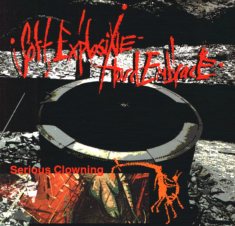 Voices of the Quarry: A magickal saga of words, images and sound conceived by John Redhead with electronic sound sculpture by Phil Beauvoir. The project was conceived by John Redhead in north Wales in 1998. Produced entirely from sounds recorded at Dinorwic quarry, the source material was morphed into aural shapes with Phil Beauvoir in shape-shifting dialogue. The whole piece consists of a book with words and images together with a CD consisting of eight pieces of sound sculpture. The CD and book are available from John Redhead.

…John brought me sounds in his black box. A raw mess of quarry-fuck. We had to contend with the new technology, coaxing the raw materials out of the DAT recorder and into the computer so we could chop and clean, slice and dice. Bundling black-bagged road-kill back to base and picking off the best bits. Some things we had to clean, other bits we left, other bits smelt funny. I had to get a grip on the software so I could get ahead with keyboard and mouse. We synchronised and captured the raw materials.

This is the stuff you don’t want to do when you’re working with potent sound with sharp edges that can cut you. So you do it in sound-bites. You find yourself with a headache at one in the morning. And as you tire of it, with the computer crashing, another glitch in Wavelab and Cubase not responding, after staring at red wave-forms, while you’re doing this, the hidden sound, the essence, creeps in and past you, a burglar, and it doesn’t care if it winds up on a magnetic disk, a magnetic tape, or a canvas, it gets there.

Then we tried to place the sounds together, where we thought they belonged, fitting a scheme planned on nights in the Taverna. That was pushing against what was not meant to be. We couldn’t wedge the slipper onto the ugly sister’s foot, so we had no choice but to let it take its own course. Whatever it was, the material needed to manifest on its own terms.

We discovered deep, buried, ancient sounds by putting the raw material under the aural microscope. We brutally stretched the sound samples, slowing them down by several factors, and listened very closely. Some of the sounds in the final piece came from a one-second sample of plucked metal wire. If you were to put that old length of rust under a microscope you’d see grades of shit, sub-cultures, some organic, some not. We did the equivalent on the sonic level with our sound tools and zoomed in so that one second of raw sound became two minutes of deep, slow otherworld. We heard disconcerting and unknown creatures, whales, wodwos and half-people.

I choose to believe this is the energy of the place stored into the metal, wood and slate of the original source, and this energy resonates with the perceptive listener. Sometimes I think it best not to delve too deep, in case the energies manifest in some other, uninvited, way. Looking back, I think the creatures did perhaps escape to create mischief. You conjure and you pay the consequences. Not necessarily bad ones, but some energies are stranger than others. So we balanced it when we wrote the final piece, ‘Lughnasadh’, with hope.

Every sound you hear in this work came from a recorded sample from Dinorwic quarries and has been shaped and placed with other samples to form the creature-piece on the CD. This is no place for synthesiser, guitar, or drum-machine. Sometimes there is a human voice, John’s madness and Ryley’s gladness; these are the quarry-people. Everything comes from that other place. Go to Dinorwic quarry, and you’ll find a slate wall pocked with one-inch diameter holes. Orchestrate and slap them with the palm of your hand and work up a new performance. Or perhaps you could scrape the slate and release a new banshee…