I’m looking for a new toy to play with. Something bold and new, some great new ‘THING’ to identify with. A change from the desktop world of Eclipse + Java. I guess it has to be web-based.

I put together this list of thrilling new (and not so new) trends:

Sounds exciting, but what do all these languages and frameworks boil down to? JAFW Just Another Fucking Website. Phooey.

As I’ve spent so many years developing apps for the desktop and on mobile (C, Java, Swing, Eclipse, SWT, EMF, XML, iOS, Objective-C, Swift) I thought I better take a look at developing for this new-fangled “web” thingy.

At first I took a look at Ruby on Rails, and found a nice tutorial. I was initially attracted to Ruby because of its colour, and it’s a jewel and a girl’s name. I also like the writings of DHH, the creator of Rails. I like it that it’s “opinionated”, like me. That means that the framework imposes a certain way of working, things have to be in the right place. It uses “convention over configuration”, meaning that I make less decisions and everything is in its proper place. I like everything in its proper place. But I don’t want to learn Ruby. In fact, I really don’t want to make JAFW, either. So I thought about it and dumped it. At least the tutorial taught me how to deploy to Heroku.

CoffeeScript on top of it? Nope, too far away from the metal. A meta-language on top of a scripting language? Double :stench: Looks like I’ll have to bite the bullet and hold my nose…JavaScript it is. JavaScript is useful, right?

So far the story consists of Node, NPM, WebStorm and a JS book…

…I’ll be back. Meanwhile, here’s that prince of TrendMongers, Greggery Peccary: 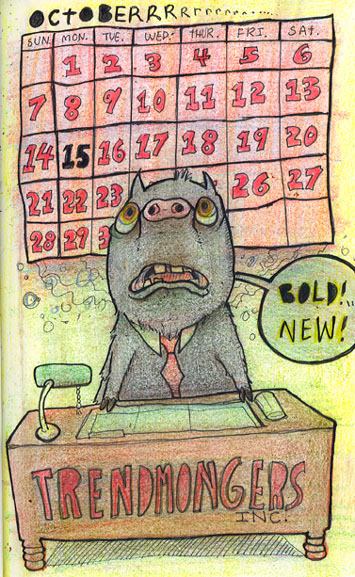 With his eyes rolled heaven-ward, and his little shiny pig-hoofs on the desk, Greggery ponders the question of ETERNITY (and fractional divisions thereof), as mysterious angelic voice sing to him from a great distance, providing the necessary clues for the construction of this thrilling new TREND…