Archi is a free, open source, and cross-platform desktop application for creating models using the ArchiMate modelling language that I developed between 2010 and now.

What is ArchiMate? I suppose you might say that it’s a bit like UML or BPMN, except that it addresses a higher level of business modelling abstraction, the domain that interests so-called “Enterprise Architects”. For me, I like to simplify this and say that ArchiMate is just more “boxes and lines”, albeit with a special meaning.

I suspect that ArchiMate and its associated framework, TOGAF, are not widely known outside of the arcane world of Enterprise Architecture and its cohort, and so the tools that its practitioners employ are rather specialist. Consequently, these tools tend to be somewhat expensive as they are aimed at mid to larger organisations, and sold using the “enterprise” level of subscription model. This is fine for those organisations that can afford it (banks, insurance companies, manufacturers), but can prohibit the individual user or student who may just want to learn ArchiMate, or at least experiment with it.

In 2009 I was working for an organisation within an organisation within an organisation (perhaps a dis-organisation?). It turned out at the time that some UK universities had started to take their first steps into this brave new world of Enterprise Architecture and ArchiMate as part of a Jisc funded initiative aimed at improving services and processes in the UK higher education sector. For many participants, this was an entirely new domain, and committing to a particular proprietary toolset to support the project was considered to be risky. Some universities had already bought a single licence for one of the existing ArchiMate tools, whilst others had started to use Microsoft’s Visio drawing tool. For larger businesses the cost of these tools and support might be no big deal, but for cash-strapped UK universities it was a serious concern, especially as they were only doing this as part of a special programme and didn’t want to incur any recurring costs if it didn’t work out. The absence of a standard export format also raised concerns of the possible danger of proprietary lock-in.

Jisc proposed that additional funding could pay for the development of an open source ArchiMate “proof-of-concept” modelling tool that could be used by those institutions as a “taster” of ArchiMate before committing to a full-blown solution, and also provide a means to make an intervention in promoting an open exchange format for ArchiMate. The proposal was for:

…the creation of an OSS tool oriented towards those making their first steps with Archimate and with functionality somewhere between template-driven drawing tools like Visio and “enterprise class” tools which would fill a space in the market and provide a platform for implementing a standard export.

Given my previous development experience with Eclipse and some familiarity with Eclipse’s modelling framework (EMF) I was given 6 months to develop such a basic ArchiMate modelling tool.

6 months for one developer to create an open source, cross-platform tool for modelling an unknown (to me, at the time) visual language. I’m not sure if you’d consider this ample provision or not. I’ll just say that, in retrospect, 10-12 hours a day of coding for 6 months carries health risks.

I set to work in early 2010, reading up on the ArchiMate specification (dry and boring when read with nothing concrete to hang it on) as best as I could given that I had never been involved with Enterprise Architecture. A first draft plan was agreed, and implementation would be basic given the limited time-scale. 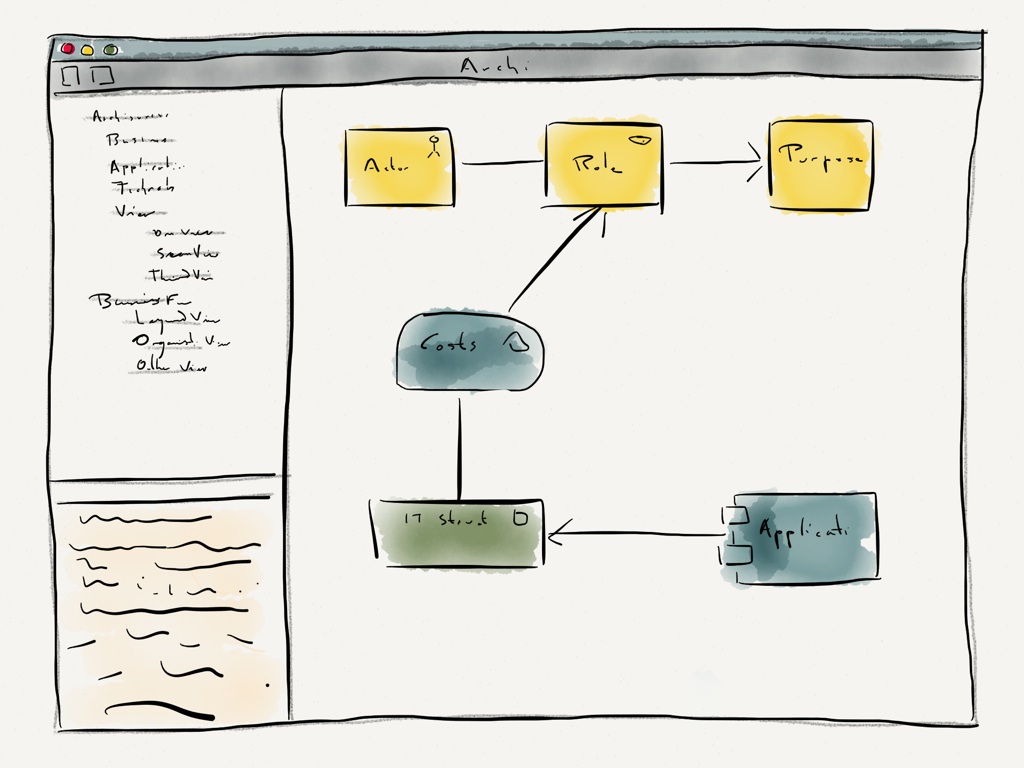