There have been a few occasions where I’ve tried to explain how the distributed nature of Git works to an interested listener, usually a Subversion (or perhaps CVS) user, who just downright couldn’t get it and got annoyed at not getting it. Clearly I didn’t explain it well, but if you don’t know how Git works, and you’ve only ever used a centralised repository system it sure can sound kind of mysterious and scary. How the hell can you have more than one repository? Which one is the real, or canonical, one? What if someone codes something phenomenal, but it’s in their own repo; how do we get that in the build? What if there are a hundred different versions? How can you integrate the work of different developers? What if there’s a conflict? What if…

I think the missing piece of information that can help in understanding Git is that there actually is a central, or canonical, repository. It’s the one you do your build from. Let’s take the Linux kernel as an example. There are probably thousands of versions of this pulled from the main Git repository, perhaps hobbyist developers, or people actually working on the kernel. But when it comes to do the build, then the agreed main repository is the one to use. One of the most useful things you can do to get a better understand of Git is to watch Linus Torvalds explain it at a Google Tech Talk in 2007 (Git has come a long way since then):

A great takeaway from that video is the slide (at about 12:30) that shows the difference between centralised and distributed systems. I’ve made my own versions.

Here’s a centralised system such as Subversion or CVS: 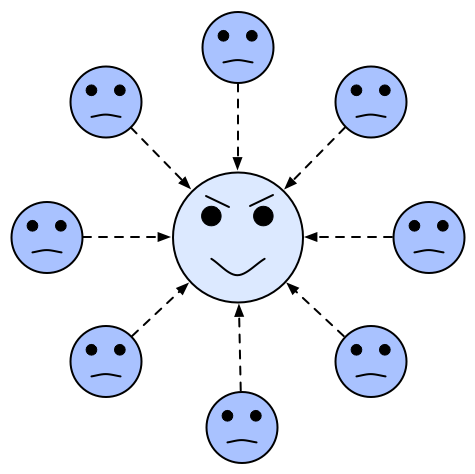 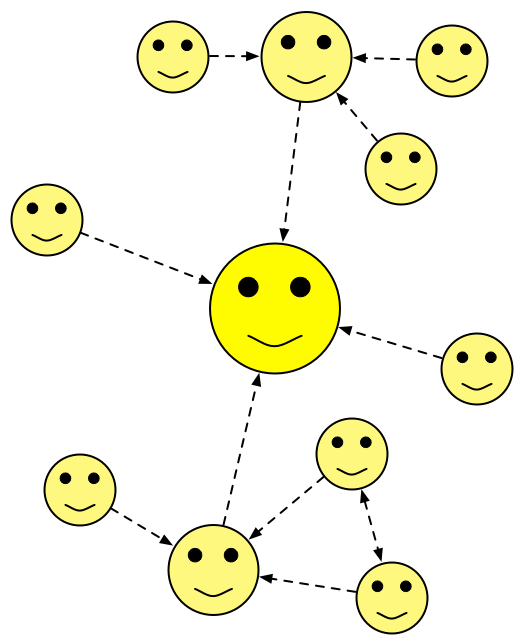 In the first diagram, each user has to commit their work to the one central repository, let’s call it The Central Scrutinizer. To pay homage to the Central Scrutinizer you have to be online. You’re out of luck if you want to commit some code when you’re on a plane. Each user works in isolation, checking their changes in and checking things out hoping there’s no conflict that requires a merge.

In the second diagram you can see that there is one main repository in the centre, let’s call it the Le Big Mac, but there are many satellite repositories owned by users that seem to have formed sub-groups. These can cluster together creating and refining their own secret sauce that can be pushed to Le Big Mac when they’re ready.

So, if you have a problem visualising how Git works, just remember The Central Scrutinizer and Le Big Mac.